From where I stand, each major car manufacturer should have its dedicated tuning company that would transform a model into something unique. Just like Manhart is for BMW, so is German tuner ABT Sportsline for Audi, and what a choice they have in developing the most outstanding programs.

Audi models are designed to receive modifications. The evolutionary design philosophy have inspired the engineers from ABT Sportsline in creating real masterpieces, both at the exterior as well as inside. And their latest program on the SQ5 is really magnificent.

The Audi SQ5 in standard guise is not the ride you should take for a burn-out or a night out, not until you put it for some serious modifications at ABT`s shop. The one seen below has received a special treatment, both outside as well as under the hood.

The tuning programs vary from one particular model to another, and for this SUV, the technicians have chosen something quite modest, yet it enhances the SUV`s aggressive look.

The aero kit comes with the massive 20-inch alloy wheels which perfectly blend in with the new front bumper and grille, roof-mounted spoiler and wide side skirts. There are also some additional carbon fiber elements added to enhance aerodynamics.

However, with the new power chip from ABT Sportsline, the premium SUV is now able to develop no less than 420 horsepower and 550 Nm of torque. Normally, the sprint from 0 to 100 km/h is done in 5.1 seconds, yet, with the new power upgrade, we should expect at least 4.9 seconds. The amount of power is also achieved thanks to the new exhaust system with custom-built exhaust tips. 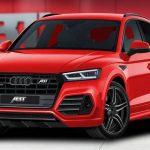 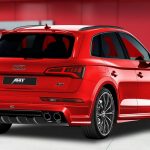